The #1 Tool For Beat Makers 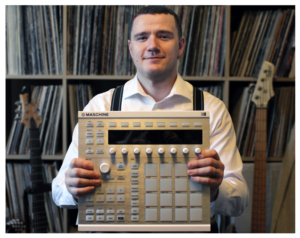 This is me. Nice to meet you.

People always want advice about what tools they might need, or what particular techniques should be used in a certain context.

And I love it.

I could talk about this stuff for hours.

But I’ll be honest…

I never pictured myself as an expert or some kind of weird guru sitting on a mountain top wrapped in white linen, meditating on the sound of the grass growing and the earth turning.

It’s true I’ve had to learn my share of things the hard way… and I’ve been down the audio-nerd rabbit hole and come out the other side.

But we’ll get to that in a minute…

When audio heads come to me asking for advice it usually goes one of two ways.

Some days I take the time to jump into it with someone, break things down for them, talk them through whatever they’re struggling with…

The truth is, I consider myself a life long student of these arts. I love talking about sound and music production stuff, sharing knowledge and helping raise the bar for everyone doing this thing… I probably get as much out of it as anyone. But I’m a busy dude, and there have been too many times when I’ve had to leave questions unanswered…

A few years back a good friend pushed me, saying, “Why don’t you start a blog? You could reach a lot more people that way.”

…and even though it’s been suggested many times, I’ve resisted the idea for years.

When I get in that zone, hours can go by in what seems like minutes.

Does that ever happen to you?

When I think about recording, editing, making beats or working with artists, that’s zone is what I fantasize about… not writing articles to post on the internet…

But the questions kept coming…

“What monitors should I get for my bedroom studio?”

“Where can I find dope samples?”

“Do I need to soundproof?”

“Should I get a MASCHINE or MPC?”

Welcome to the f##king blog.

You can expect articles on everything related to making beats and working with artists:

Seriously though, it really has been a blessing to have spent some great years doing work I love… having fun, being creative, making some money, making some friends, and getting to work with some incredible artists along the way.

It’s something most of us don’t think about enough. It’s easy to be careless and not realize the damage until it’s too late.

We all like going to shows, to the club, or just blasting some good music in the studio.

As a music producer you KNOW it’s important not just to hear the music, but to FEEL the music…

And that means going loud, right? Hell yeah it does, and there’s nothing wrong that.

Hold up a second. I know some of you guys might be rolling your eyes right now.

“Hearing? You’re gonna tell me hearing is the number one tool for beat makers? Come on PLAN A, tell me about studio monitors, tell me compression, tell me about chopping samples!”

I know a lot of folks just want to read about the next shiny toy for the studio. We’ll get to that stuff another day.

There’s a thousand other blogs out there where dudes will just tell you about the technical stuff.

I’m telling you this NOW because I care about you and want you to succeed with your music.

Let me tell you a quick story about my friend, we’ll call him Marco…

Marco wanted to get a huge new flat-screen TV for his living room. He was doing pretty well, so it wasn’t a big deal in his mind to drop $5-6K on this thing… And he doesn’t even watch that much TV. Before he bought it, it just so happened that he had a visit with the eye doctor and got some bad news. He needed surgery on his eyes or he would gradually lose his sight. He was pissed. He didn’t want to spend the money on the eye surgery. It mean’t he might have to wait a few months to get the big screen TV he’d been lusting after.

HOW CRAZY IS THAT?!!

Dude had no problem dropping a ton of money on something to look at… but bugged out at the idea of spending money to be able to SEE ANYTHING at all!

Here’s a simple guiding philosophy to help you make a lasting and enjoyable career with music:

PROTECT YOURSELF + HAVE FUN…

The rest can pretty much take care of itself.

You already know that your senses are your gateway to the world, right?

So as an audio head, hearing is your #1 tool.

If you want some longevity in this game, you can’t f##k up your hearing.  If you do, it’s game over.

How are you gonna mix those ringing cymbals when your ears are ringing all the time?

How are you gonna find cool sounds when everything coming out of your speakers sounds muffled… ALL THE TIME?

So don’t mess around with your hearing.  Pick up a pair of earplugs.

You can grab a pair of foam earplugs for $1-2 at a hardware store or pharmacy today. The downside of the cheap ones is that they muffle sound a bit, especially upper mid and high frequency sounds (harder to hear vocals, talking, detail)… but it’s better to have muffled sound for a night than for rest of your life. Am I right?

If you’re like me, and you want to protect your hearing and still have a great sound experience,

there are some dope options available. Some nice custom fit ones might cost you around $200.

If that seems expensive, but you still want something really good, check these out.

I’ve been testing out a pair for a while now and have been VERY IMPRESSED.

For the price (under $20), I don’t think there’s anything that competes.

You keep that crisp, detailed sound, but get enough of a volume cut that your ears won’t be ringing when your head hits the pillow after a night out. Plus it comes with a sweet carrying case (with a secret compartment…) so they won’t get grimy in your pockets.

With cheap earplugs, you have to take them out of your ear every time someone tries to say something to you. With these, you still get all the details you need to understand what a person is saying – just quieter – so there’s no need to be constantly fiddling with them. For me, that’s a big plus.

If you want something that shaves a few more decibels off – try these ones:

Grab a pair and be done with it so you can move on to more creative ways of spending your brain power.

If you want to make a career of this music thing, you’re gonna need good hearing, right?

Do yourself a favor and take steps to protect your ears before the next big night out.

Protect yourself + have fun.

PS – Want to win a set of high fidelity earplugs? ENTER TO WIN A PAIR HERE! I have 2 sets to give away thanks to the good people at earpeace.com– respect!

All kits include CD quality WAV files and MASCHINE groups.