The Death of Music?

On a chilly October evening, I was having a conversation with an older friend. I was in school at the time (a few years back) and we got to talking about my studies.

I mentioned that I was writing my Masters thesis on drum programming.

“Are you going to call it the death of music?” he asked me, amused.

It wasn’t the first time I’d heard this point of view. I wished I had the perfect answer to shut down that arrogant jab.

When I started making beats, even I had my doubts that this was “REAL” music…

Do you ever find yourself doubting what you do with music? Share your story in the comments section below.

The truth is, I didn’t have a lot of traditional musical training when I got started making beats…

And I’ll be the first to admit that when I started, the beats were NOT all that good.

Even now, I throw out more beats than I finish. That’s part of how I make sure what I put out is of the highest quality.

My friend’s attitude is part of a widespread pattern where some people decide that a particular approach to making music is not “real” or “authentic“.

Have you heard this stuff before?

You might have even seen this famous bumper sticker announcing that, “Drum machines have no soul.” 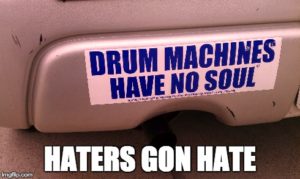 A lot of us have become accustomed to these judgments… but they don’t tell the whole story.

If you are one of those people that thinks there’s no artistry in making beats, please just leave now. You’re obviously in the wrong place. I don’t want to waste my time with closed minded people.

If you’re still here, then I hope we’re on the same page.

A lot of you have seen my 16-pad sampler SCALES, right?

When I put that out on Facebook, a lot of folks liked and shared that post. Many left comments to say thanks…

A few even posted videos of how they were using those scales like this one – AWESOME.

It came as a surprise when the haters started showing up.

The first comment just seemed funny, so I let it stand:

But it started to concern me a little more when other trolls came out with comments like these:

I’ve heard this shit before, but I didn’t want to just let these stand without saying something.

So let’s talk about these, one at a time.

There is NO reason why a MASCHINE or MPC shouldn’t be considered a legit musical instrument. Period.

New instruments have always been met with doubt and skepticism. In the words of Trevor J Pinch & Karen Bijsterveld,

“Throughout history, new instruments and instrument components drawing upon the technological possibilities of the day have often incited debates as to their legitimacy and place within musical culture.  The arrival of the pianoforte into a musical culture that revered the harpsichord was for some an unwarranted intrusion by a mechanical device.” (Technology and Culture; July 2003; 44, 3; Social Science Module, Pg. 536-559, emphasis mine)

When someone first figured out to put linked mechanical valves (keyhole covers) on flutes, some musicians criticized that as taking away from the instrument.’s artistic potential and making things too easy.

Now that’s just how we think of flutes – and it’s a perfectly respectable instrument you’ll find in any orchestra around the world.

You know what else? My grandma never learned to use a computer. Times change, but not everything new is bad, cheating, or inauthentic.

The second point is a bit different:

This one isn’t about the instrument, it’s about the musician – and claims to musicianship.

So let’s clear the air.

If you’re making beats, you ARE a musician. End of story.

That’s not to say you’re a virtuoso because you looped two bars of an already great song and put some drums over it. We can probably all agree on that, right?

If you’re learning scales to improve your MASCHINE game, you ARE studying music.

So how do you become a better musician?

And… that’s about it.

So yes, you should study music…

And also… who cares?

I hope you’re here because you DO want to improve your skills and make better music.

Again, if that’s not you, you’re probably in the wrong place. Save us both some time and move along.

Of all the ways to get better, just playing around might be the easiest… maybe even the funnest, but it has a slower learning curve and less chance for breakthrough results than disciplined practice or focused study.

Me, I’m a busy person, so finding the most effective way to quickly get from A to B is very appealing. Seeing results is part of what makes things fun.

So, let’s talk about study and practice.

When I’m not making music you might find me at the dojo, training Brazilian Jiu Jitsu. When I want to get good at a technique I need to A) understand it, and B) drill it like crazy.

The same is true with music tools and techniques.

If you’re like me and got into this game without a ton of traditional musical training, no problem. Hang in there.

These are learnable skills.

As a beat maker, knowing how to play keyboard, in particular, is awesome because it will be your go-to controller 99% of the time if you’re using virtual instruments.

It’s also great if you’re working with other musicians to be able to show them the riff you want them to play.

I like to be systematic.  I know that if I put in regular work on something, anything really… getting better isn’t a question, it’s a side-effect of that routine.

I also know that I get bored easily, so it’s important to keep things fun.

When something becomes boring, the chance that I’ll keep going with it goes WAY DOWN.

A few months ago I decided that I wanted to improve my keyboard skills and actually learn to play some songs instead of just noodling around.

I wanted something that would be fun, easy to use, and help me improve quickly while working at my own pace.  It also had to be inexpensive and time-flexible. I also wanted to spend time playing music I actually enjoyed – no nursery rhymes or beginner-level arrangements of the most over-played classical songs.

I’ve been testing it out for the last few months and wanted to finish this post with a mini review, in case you’re looking for ways to improve your keyboard chops too.

You earn points as you go, so it’s easy to make a game of it.

What I love about this is the how it makes practising and learning fun… makes it easy to progress quickly.

I started paying the monthly plan ($19/month) to test it out. That way I could cancel any time if I didn’t like it. A single 30 minute lesson where I live would have cost more than a month of Playground Session.

After a week or so, I was able to play a few songs and within a month I was feeling pretty good about my growing repertoire… very cool.

What I don’t love is that even though there is a ton of songs you can learn with the software, there are still lots of other songs that aren’t available on there. Fortunately they add new songs frequently.

All told, I got good use out of it and decided to upgrade my plan to the lifetime membership.

If you want to learn some keyboard skills and don’t have a lot of training, check it out.

All kits include CD quality WAV files and MASCHINE groups.